-Gilbert Monsanto
Posted by monsanto at 11:14 AM No comments: email me at smp_letters@yahoo.com or visit my facebook and PM me there.
https://www.facebook.com/gilbert.monsanto
Posted by monsanto at 4:24 PM No comments: 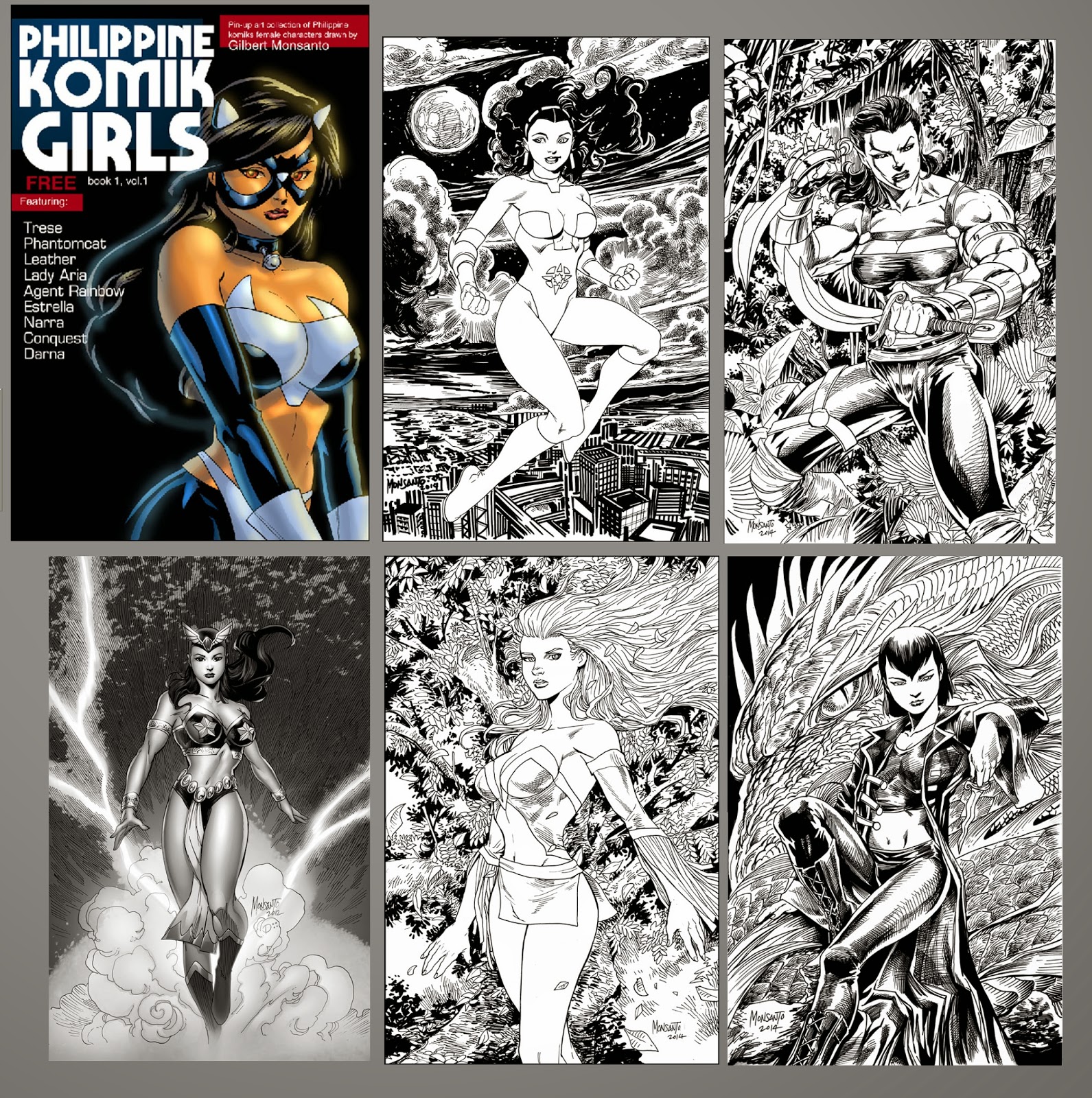 This year, I have a new goal to support the Local comics industry. I'll be doing pin-ups, either random or commissioned ones for 2 thousand Php each. I'll be needing 20 to print out 1,000 copies and be given to possible new readers...FREE!

These pieces will be inked pieces on 11 x 17 artboards. I can send them through LBC within the Philippines only, any buyers outside the country should carry the shipping cost.

The characters featured should be Local komiks characters.

If you have any request, please email me at smp_letters@yahoo.com

Posted by monsanto at 4:12 PM No comments:

Ways to uplift the Komiks industry that some don't want to hear. part 3 " I did it my way."


( before you proceed, remember that this is all about the Philippines. Any opinion outside the country might not be valid.)

The technical know how is also a factor most local creators seems to avoid learning. To think that we are a close-knit and not that big community, one would think people will talk about this and use them to their comics right?... No.

According to a mythical rule, we tend to " DO IT MY WAY." or else maybe... this is just a hunch, maybe they would think less of me as a creator.

Identity is one thing, but making a mess because you don't want to be like anybody else is quite unreasonable. Comic fonts? use comic sans because you just want to?

Randy Valiente mentioned that the old comic folks are having a hard time understanding the new komiks world. I believe that the komiks we worked for years have different dynamics. We work with editors, we get rejected or we get paid. Simple reasons why we have to learn more things because if pages gets rejected, no pay. We get published for readers nationwide to see our work and read our comics. It is the same routine every week. We don't have comic convention then. Readers would send us snail mail and not email. Today, nobody gets rejected. The creators have complete control over their comics. This is both good and bad for the industry. Good that komiks will be expressed freely, raw and as the creators had intended it to look. Bad, because if the readers rejects them. That title will be another failed attempt.

Now, imagine every year filled with new titles because failed attempts usually just gets to stop while the creator just makes new titles. That might not be a healthy practice.

I have seen great titles with creators expanding their knowledge in the field and I am happy to say that they have been successful so far. I do hope more creators follow their footsteps.

I am only writing about this because I think people needs to know. If they listen, that would be great. If they choose to still do it their way? of couse... good luck.

Ways to uplift the Komiks industry that some don't want to hear. part 2

( before you proceed, remember that this is all about the Philippines. Any opinion outside the country might not be valid.

As of now, the reactions are still leaning towards " contents " inside the titles. I think that this is irrelevant to what I am writing about. You see, the right content in a komik title is as unpredictable as the weather. There is no sure shot formula anymore. Who would think that a talking chicken would win awards? Not even the author would say, Yes! I did that title to win me awards. He did it because he felt right creating that book.

People are always focusing on how to make a book that will blow people's minds and sell hotcakes. We forget that the most beautiful thing we can share to the world is something closer to us, the creators. I think the real formula is seeing a creator working on a book that he is passionate about, bringing more people with similar interests together, instead of producing a book that people might think about or like but has so many demands on that particular story.

Whenever Darna gets revived? Everybody and I do mean everybody seems to be a Darna expert. She should be this, she should be that. With the original author not among us to get the facts straight. All we get is more confusion on how Darna should be.

Dishing out an original story is still the best way to go.

Talking about book concepts openly is also a big no no. I have had the experience of sharing a concept out loud with a company I thought will work with me and well, the publisher flew with it, without giving me any credit for it. I hear people saying that this guy and that guy are so uptight, not sharing the story and would ask them to just buy the book. Well, folks! They are wise to do that. If you really want to read komiks, you invest on it. The creators did that by painstakingly doing what must be done producing the book. You should too.

So content is the least, the least of our problems.

Ways to uplift the Komiks industry that some don't want to hear.

( before you proceed, remember that is all about the Philippines. Any opinion outside the country might not be valid. )

For years, we've heard so may different things about Komiks in the Philippines. We debate on the real state of komiks, whether it actually died or never did. We talked about what kind of stories should be done in order to gain renewed momentum in the hope to catapult it back to it's former glory.

But little did we know that the glory days of komiks was not the glory days for creators. Nothing much has changed. The practices of years passed is still with us. The komiks was to benefit publishers and not the creators who actually made them. Creators are still nothing but work for hire contributors to most Publishers.

Let me give you a picture of how this is not beneficial to creators. One time, a publisher wanted me to do a "How to draw book." I will write it, draw images but in some strange way, they don't want me to own it. I said, I wanted royalties for MY books. They said no. They just want to give me 17k for each book and they will own whatever I produce. That is TOTALLY insane. My name will be on that book. i'll be thinking of concepts and everything that I know will be in it and they want to own it?

Now let us say, I was stupid enough to agree on that ridiculous terms. They'll be selling those book for as many as they can. 10 thousand maybe? What if it was a surprising hit? 200k copies sold? Heck they can even sell them for years. They'll get all the profit while me? I'll get to keep the 17k pesos they paid me. It only lasted for maybe a week or less to spend it all. Can you imagine how depressing that scenario would be for me as the creator of the book?

Now imagine this on my terms. Let us say, I'll get that 17k for the book and then maybe a minimal amount for royalties per books sold. Let us say 1 peso per book that costs 200 pesos on retail. Each time it hit a great number of copies sold. I'll get royalties. imagine us, the creators having a better life. Wouldn't that be nice.

If ever, my book flops. No harm done. Now, the question on a publishers' mind now is how can this be a good thing and how it can be beneficial for them for agreeing to such a term? It is simple. The creators will give you nothing... nothing but their best in every project that they'll ever make.  The BEST will be coming out from your publication.

You see, going to the local conventions and meeting with other creators. Each time we show some stuff. You can always tell which one is a work for hire page from their creator owned projects. Guess which pages would be more detailed? You guessed it.

Is this right? is this practical? Is this just? Yes, in all fairness of the game. It is just right. A 5 million-peso house will always be more beautiful and well built than a 2 million-peso house. That is why there is such a thing as costing. We don't tell the architect to lower his fee right? They are professionals, and I'd like to think so are we. The writers, artists down to the colorists are professionals.

This is just one way to enrich the lives of the people behind Komiks that some people just avoid talking about. There are more, oh yes. This is only one of many things that we can talk about.

So, let's talk about it now.

Just remember, in order for us to save komiks, we have to save the livelihood of those behind the pages of the said industry.

ARTISTS, one and all.

When a stranger sees me pencilling outdoors, the instant question would be. Are you drawing without anything to copy? FROM YOUR MIND? That's amazing! The concept of this is the main reason why I think pencillers are more valued in comics. Not because you have a great style and all that but because you can put to paper images from the words that a writer wrote. Pencillers are like directors, lightsman, the propsman, the acting coach and the cinematographer inside a movie that is trapped in boxes.

As for Inkers, people then to think that they trace the lines and just that. In fact, most penciller don't do well inking their own work. If they get a great inker, the inker maximizes his time to polish every lines from the penciller, who gets tired at times at the end of each book. Inkers gives consistency and clarity. That is where the art of inking comes in, therefore makes them astists.

Colorists are now having another hard time with people's perception as well. They are the bringer of life to a black and white picture penciller/inkers can only do so well to a certain extent of their capabilities. The colorists decides everything and yes, they have to read the script to know if the time was right for a day shot or a night scene. They need to remember the skin tones and all that makes the comics unique, preserving an identity. They are artists as well.

We, who makes these pages respects each other. I do hope, everyone does as well. Please keep this in mind and respect ALL artists for unquestionably being who and what they are.
Posted by monsanto at 12:15 PM 3 comments: